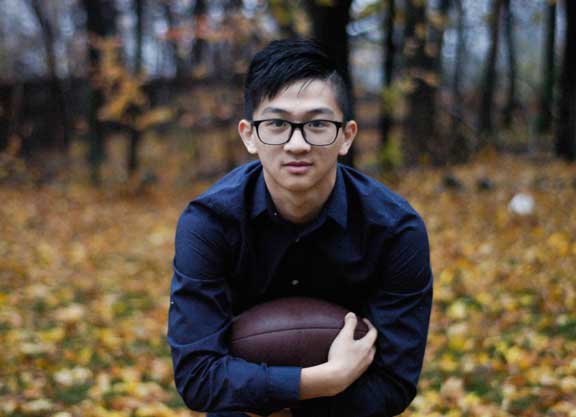 Almost every Monday through Saturday, from August to December, you can find the Medfield High School football team going through a strenuous regimen of practice and conditioning. All of these players are local students, many born and raised in Medfield, save one: Andrew Xu. Standing 5’5” and weighing in around 140 pounds, Xu does not look like your typical high school football player.

Xu is one of 83,000 international high school students to study on F-1 visas in the U.S. in 2014, of which 58% are his Chinese compatriots. On paper he is just another applicant hailing from the city of Shenzhen, one of China’s leading economic powerhouses that sends thousands of students abroad every year. On the field however, “Shoe,” the moniker given to him by his teammates due to the similarity with his last name, more than played the part – he lived it.

“He was passionate and committed to the football team and saw the whole experience through with the right attitude and demeanor,” recounts his coach and Medfield High guidance counselor, Erik Ormberg. He then added, “I wish we had him for all four years.” Even though Xu only took the field for a handful of plays the whole season, you’d be hard-pressed to not find #5 at a team practice or social event. On the final day of the season Andrew asked to speak with the team and proceeded to give “…a stirring speech about the brotherhood of football… It clearly meant something to Andrew to be a part of this team.”

This commitment did not go unnoticed, and Xu quickly made friends, integrating into the team and school community.

As one of only three international students and entering Medfield High for his senior year, he faced one of the most daunting social challenges of his life — a gauntlet of awkwardness and insecurity that would strike fear into the heart of most adults. However, the invisible barriers of well-established social cliques that cause many of us to cringe when recalling high school memories were no match for Xu’s kind and unassuming personality. His advice for overcoming social challenges? “Be outgoing and be nice. Let people know you by telling them what you’re thinking instead of making them guess.” Wise words from such a young man.

His gphomestay host mom, Gabriela, can attest to Andrew’s kind nature and upbeat attitude. She explains, “Andrew is a very playful, kind and family oriented teenager with a very positive attitude. This has helped him to adapt quickly to American culture, food, language and also to our family. His sense of humor makes him special and brightens up the atmosphere wherever he is. His good judgment makes him reliable and trustable.”

“Playing sports doesn’t mean you don’t have time to study” says Xu, a clear dismissal of the fear held by many international students and their parents that participating in after-school activities will take too much time away from studying and homework.

Despite the substantial investment football requires, Andrew excels in the classroom where he maintains a high B average in his classes with little to no accommodations. Even in Mr. Mandosa’s English Literature class, where dense classics such as Beowulf and Macbeth are a core part of the syllabus, “Andrew has more than held his own – he’s been meeting class expectations, not just simply ‘getting by.’” The unique perspective he brings to the classroom as well as his inquisitive and friendly nature are lauded by his teachers and classmates alike.

While Xu’s experience is not completely unique – it is exemplary. For many students, especially those from China and East Asia, the largest obstacle they face is the cultural transition both socially and academically. Andrew’s experience has put him in a position to share some pro tips with those who will succeed him.

When it comes to studying for tests, Xu opts for the tortoise approach, studying consistently night after night to keep up in classes and remember the material covered. He believes studying the day before the test is dangerous, “if you see something you don’t know, it hurts your confidence and you can’t trust yourself anymore.”

Whenever possible, Xu recommends that students get out of their comfort zones and try something new. “If you choose a course you’re already good at, people might say ‘Wow, you’re good!’ and give you confidence, but it’s only temporary and you won’t learn as much as you would if you challenged yourself.”

“Every international student should join a sports team… you have the same goals and it’s easier to have access to the community” says Xu. When it comes to looking at colleges, Xu advises international students to ask their peers; “They have a different perspective than your parents,” says Xu.

Xu looks forward to the future and his college prospects are looking good. Ever the humble student still hungry for knowledge, when asked if there was anything he wished he could still do, his first answer was, “learn how to cook.”