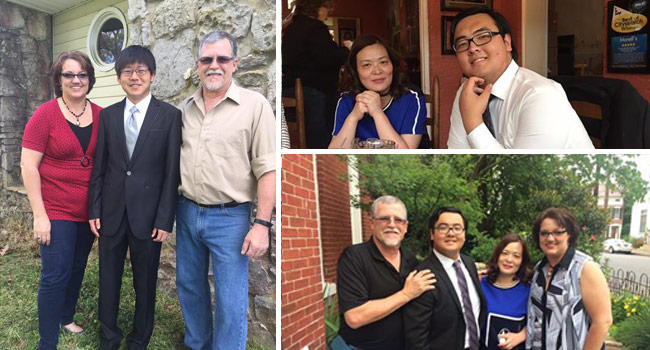 Laura Bruyn hosted Richard and Mark* for two years while they attended Davidson Academy in Nashville, TN. Laura had the opportunity to meet her students’ families when they made the journey to watch their sons graduate. Laura’s family has grown by two international students, and both Richard and Mark will always be welcome in the Bruyn household.

1. Can you tell us a little more about the international students you hosted this year with Gphomestay?

Richard is an only child. His father works for the Chinese Government and his mother works at a University. He is very outgoing and has embraced every aspect of United States Culture. He is a very giving person and often gave gifts to his friends and teachers. He always brought in food for a special class at school or for someone’s birthday. Richard is able to included himself in a group and became part of that group very easily. He is very social.

Mark could not have been more opposite than Richard! Mark has a younger sister, and his parents are self-employed and run a factory business. Mark has a very deep respect for money and will not spend any unless it is absolutely necessary to do so. Mark has a very analytical mind and goes off to what we jokingly refer to as “Mark’s World.” He is very dedicated to his family and Chinese traditions. It took us a while to break through to Mark, but once we gained his trust and broke that barrier, we discovered what a fantastic, funny and sarcastic human being he is.

2. What was it like when you first met your students?

We picked Richard up from the airport first and had two days with him before Mark arrived. It was awkward at first because Richard had been through three host families the previous year and did not have pleasant experiences, which caused him to be very guarded at the beginning. Mark was very quiet and respectful. He was worried about rules and not breaking them. I was worried about Mark fitting in with our family at first because he was so reserved. We have a large family, and people are in and out quite a bit.

The first weekend we had both boys, we took them to several International Markets to help them get some food that they were familiar with and could “blend” with my American cooking. They both really appreciated this, and I was able to see what their choice of snacks and go-to meals would be, should I choose to not cook some evening. I made sure to keep these ingredients on hand. Mark and Richard would combine leftovers with different kinds of sauces and noodles, and they came up with some very creative meals.

Cooking helped to build a bond between Richard and me. He was very interested in learning and had a passion for food, so he often helped me in the kitchen. During his second year with us, he would call me and ask if I wanted him to start dinner. Mark never really had an interest in cooking, but he did learn how to make eggs and that became an every-morning ritual on every non-school day. I should have bought chickens to help support Mark’s egg habit.

3. What inspired you to become a host parent?

A year before we hosted the boys, our son signed up for a summer soccer camp. They asked if anyone would be willing to host the coaches as they were doing these camps for their colleges and traveling from all over the world. We had the space, so we said yes and we ended up with all three coaches! Two of them were from the UK, and the other one was from Brazil. They were only with us for three weeks, but we had such a good time learning about their culture and lifestyles. I loved watching them interact with our son, and how he took to new interests and began to have different opinions on certain topics based now on a broader “world-view” that he was gaining.

When my son began at Davidson Academy, we knew that they had an International Student program but did not know much else about it. Our son began talking about some of the living situations that a few of the students were dealing with. Then at a school event, a table was set up advertising gphomestay and they expressed that they were in need of families to host some students. I saw this as an opportunity to have our son learn again firsthand about another culture. With Eli beginning the 8th grade, I thought it might help him to stay focused on his own work and pick up some of their educational values. At the same time, our family is very liberal. We have a non-traditional household which is multigenerational, and we are open to new ideas and communication. I thought that we had something unique to offer to an international student as well.

4. Did you have any expectations about hosting before the student arrived? Were those expectations on par with reality? What were some things you got of the experience that you did not expect?

I knew that the Chinese cultural eating habits are very different from the typical American dinner table. The first few weeks that we had the boys, we regularly discussed table manners and compared ours to theirs. I explained that since they will be living in America for the next 5-7 years, they will most likely be eating at many types of restaurants and possibly friend’s homes, so they would need to learn and practice American table etiquette. This was discussed regularly and I corrected their behaviors on a regular basis. We also had several Chinese meals and they taught us appropriate use of chopsticks and common Chinese customs and what would be considered rude at their dinner tables.

5. How has your relationship changed with the student as her host parent?

We had both of our students for two complete school years, and we sent constant communication to their families in China, including sharing photos and life stories. We have grown very close to our students, and we plan to stay in touch with them while they attend college. We’ve also offered for them to come and stay with us during school breaks if they do not have any other plans. Our relationship with the boys did not end just because they graduated; they have become part of our family.

Our family has grown by two! and has exponentially grown with their extended family.

I was a public middle school school teacher for seven years, have my own biological child, and was a foster parent to two boys. Later, we adopted the boys. We are also a multigenerational household, and have helped several people over the past 10 years by having them stay with us until they get back on their feet.

The only way this works is open and up-front communication! I have listened to several stories and complaints by other host families of situations and problems they are having or had, where a simple sit-down talk would have resolved the issue. Host parents cannot sit back and assume the students are completely self-sufficient. These students are still children, who need “parental” guidance, mutual respect, and to feel like they are welcomed, loved and part of your family. The more invested the boys became in our lives, the more ownership they took of things and the easier our routines became.

I respected them, talked with them and not at them, and I sought out their opinions. Any conflicts we had were quickly resolved with a respectful conversation and explanation on both sides, which included cultural references as well. Most problems stemmed from cultural differences, not outright defiance. Host parents need to keep that in mind and keep the communications flowing.

7. Can you describe graduation with your student this year?

Graduation was a very emotional time for us, it meant that the boys would be moving on and would not be back next year. It was also very exciting, because in China, there is no formal celebration for graduation. The announcements, prom, the cap and gown – it was all completely foreign to them, but you could see the pride that they had when they took part in each event.

We did have Richard’s family in town for his graduation. We spent a lot of time with them and shed a lot of tears. As I sit typing this, my eyes are cloudy remembering meeting Richard’s mother for the first time. No words were spoken, no formal introductions were made, and yet we stood staring at each other, both crying and then mutually embraced. Richard and my son both asked, “Why are you guys crying?” I told them they will never understand because they will never be able to be a momma!

She allowed me the honor of being a part of her son’s life and having him to be a part of our life. It was an honor that I will respect and cherish for the rest of my life.