Webinar Recap with Tammy Rocke, “What It’s Really Like to Be a Host Parent”
Become a Host 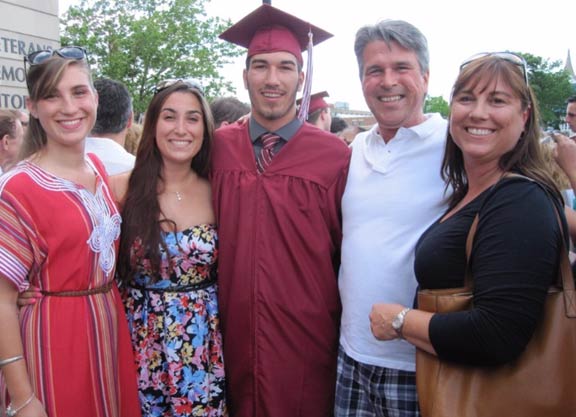 Webinar Recap with Tammy Rocke, “What It’s Really Like to Be a Host Parent”

On Tuesday, June 14, Gphomestay’s Maura Pfeifer hosted a webinar for families new to hosting and in the process of becoming a host family. We discussed the many benefits of hosting an international student, and what to expect when a new international member of your family joins your home. We also discussed cultural differences, steps to becoming a host family and the application process, host commitments and services we provide to gphomestay families.

Maura then opened up the webinar for a Q&A session with Tammy Rocke, who has hosted international students for the past two years. She first hosted a student from Germany for a short time, then decided to host a Chinese student for the full year. Tammy lives in Rhode Island with two of her three children, her husband and their five dogs.

Below is her description of what it is really like to host an international student, and how her student, Clark, integrated with her family over the past year.

1. Why did you decide to become a host parent?

Our daughter lived with a host family in Germany when she was in high school and she had a great experience with it. When she came back, we decided to host a student from Germany for a short period of time.

When all of the kids moved out of the house for college, we decided to host a student through gphomestay since we had a great first experience. Two of our kids have since moved back into the house so there’s a lot of people here now!

2. Did any problems arise with your students while you were hosting?

The biggest issues we came across was that Clark was unfamiliar with completing homework on time, because in China passing in homework is not the cultural norm. He also LOVES playing games on his computer, he would play them all day if he could.

We originally took his computer out of his room and put it on the kitchen table so we could monitor him doing his homework. We also turned off the internet after bedtime so he wouldn’t play games all night.

I consulted with our Support Services Coordinator (SSC), Phil, because I was worried about his grades and that he wasn’t turning in his homework. Phil was great. He picked Clark up after school one day, and brought him to get a burger and talked about why homework is an important part of maintaining his grades.

3. Did you have any expectations about hosting before the student arrived?

It’s really important that you don’t have any expectations about hosting a international student. I was lucky because my daughter Megan studied abroad in China for a year, so she knew a lot about the cultural differences we may face.

While I was raising my own kids, each one of them had different personalities – so I had to tailor the way I parented to each of them. For example, one of my girls is incredibly neat, while my boy is more on the messy side. He needed more reminders about tidying up after himself. I did the same with Clark. I got to know him and his behaviors at the beginning, then set some guidelines.

4. What did you find most rewarding about hosting an international student?

I love watching Clark interact with my family. We all think of him as one of us. It’s fun to watch the sibling rivalry that goes on among my kids and how they influence Clark. For example, when we pick Clark up from school, he almost immediately falls asleep in the car. My daughter takes pictures of him sleeping and teases him with them. Clark thinks it’s pretty funny too. We had a respite student stay with us for a couple of weeks and Joe fell asleep in the car. Clark immediately took out his phone to photograph it!

5. Did you set the same rules for the student as you did for your own children?

I did. I didn’t want to treat Clark any differently than I would if he were my own. I now just have to remember that my kids are young adults, while Clark is still a young teenager. And no matter where you are from, a teenager is still a teenager! He knows that he has to clean his plate after dinner, and maintain a reasonable amount of chaos in his room. He’s a teenage boy, as long as nothing is growing in there, I’m happy!

My daughter also taught us that laundry isn’t done as often in China as it is done here. We remind Clark to bring down his laundry daily so I can do it. If it were up to him he’d wear the same clothes a few times before washing them.

One thing that Phil assisted me on was that Clark asked to take the train by himself with some other international students from Providence to Boston. I said no to him because I would never have let my kids do that unsupervised at 15. He made me especially worried because of the language barrier. It is common in China that young kids do this however, so I asked Phil if I was being too much of a mama-bear by not letting him go, but Phil agreed with my stance.

6. Did cultural differences affect your relationship with your student and your hosting experience?

We have a big loud household. Now two of our adult kids are back home, and between their two dogs and my three there are five animals in the house! Clark is an only child that has no pets at home, so that was definitely an adjustment! He has grown to treat my kids as his siblings, and two of the dogs have adopted him as their favorite, mostly because he feeds them snacks. They lay on his bed while he does his homework and they follow him around. We had to put one of the dogs on a diet because he feeds them so many crackers!

7. What has your experience been hosting with gphomestay?

It really has been easy. My last hosting experience was with a different type of exchange program, so I was surprised when I received a monthly stipend. It gets direct deposited into my account each month. Phil is great. I can text, call or email him at any time and he’s available. We also have monthly check-ins which are either done by phone or in person, but he really is available whenever I have a question.

8. What kind of support does gphomestay provide?

Phil really helped me get through to Clark about his grades. He organizes quarterly events for all the students which are great. There was a water fire event, we went to a corn maze, and Phil was especially nice over spring break. He took Clark by himself to a Red Sox game to get him out of the house.

9. How has your family life changed since bringing in a host student?

My kids really look at Clark like a sibling. Sometimes they will pick him up from school and take him to get a hamburger. He is really shy and we have a lively house, so it has been fun to help him get out of his comfort zone and learn about our culture, like we have learned about him.