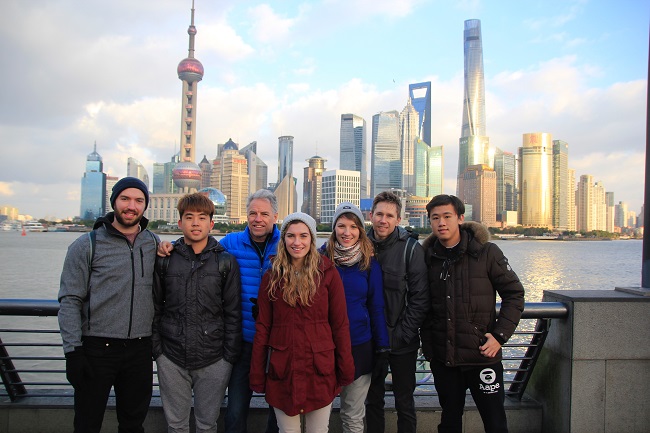 On Christmas Day of 2016, Laura O’Connor and her family arrived in China to begin their spectacular two-week journey lead by their international students for the past three years. Laura, a teacher from Wheaton, Illinois, has been hosting Daniel, Gary, and Allen since they arrived as sophomores in High School back in 2013. After having developed an extremely close relationship akin to family over the past three years, the boys offered the O’Connor family a tremendously generous proposal: to host them in their native country, and expose them to some of the world’s greatest cultural hotspots.

Over the past three years, the O’Connors have helped the boys get fully acclimated to American culture, and provided a place for them to call home. Now, it was their turn to be hosted in China. “Now they’re in charge” explains Laura as she describes how it felt being led by teenaged boys around some of the busiest cities in the world. Since no one in the O’Connor family can speak the native language, it was up to Gary, Allen, and Daniel to translate everything; they were responsible for ordering food for them, buying train tickets, and all the basic functions needed to effectively communicate.

The family kicked off their journey with a three day stay in Shanghai with Gary and Allen, where they rented a place through Airbnb. They were able to visit the Fu Gardens and The Temple of the City Gods, where they could marvel at the beautiful architecture before taking the Bullet Train to Beijing. It was there that they were able to see the Temple of Heaven, and ingrain themselves with one of the world’s most famous attractions that any sightseer would consider imperative to knock off their bucket list: The Great Wall of China. One of the seven wonders of the world, this man made mega structure is nearly 5,500 miles long, and over 2,300 years old. Since this attraction is known to bring in a heavy amount of traffic each day, they arrived early enough in the morning to enjoy the sights for nearly two hours before any other visitors showed up. Finishing the tour with a camel ride, Laura described the experience as “so beautiful” and “unbelievable”.

Some other popular spots they visited in Beijing were the Silk Street Market, a grandiose shopping center where tens of thousands of customers come each day for some retail therapy; and the Forbidden City, an ancient imperial palace rich with historical culture and is also home to the famed Palace Museum.

From Beijing, the family flew to the large and wealthy city of Shenzhen, where they met up with Daniel. Daniel’s mother was excited and pleased to meet the family she had heard so much about from her son, and even arranged a driver to transport them around the city of Hong Kong. There they were able to continue to explore the famed city, take part in a boat ride around the harbor, sing karaoke together, and eat at a large, luxurious restaurant. The family was also able to spend one day with Allen and his family, as well as another day with Gary’s parents. Laura added that all the boys’ families “showed us fabulous hospitality as we explored the food in Shenzhen with them”.

The O’Connor family were able to experience the amazing sights China had to offer because of the extreme generosity of the thankful students they had hosted for three years in the U.S. After immersing themselves in Chinese culture, Laura says her favorite parts were the food, getting to know the culture, seeing the world from the perspective of the boys, and learning why they love to travel and are so eager to see new cities. She does, however, wish to have seen more of the beautiful and scenic countryside China has to offer. Something she did not expect was how modern and stylish everything was; “our malls are disgusting compared to theirs” explains Laura as she laughs. “Everything is detailed and ornate” she continued.

We consistently hear stories of our host families connecting with their international
students to such an extent that they eventually consider them to be part of the family. In the case of Laura O’Connor, she considers Gary, Allen, and Daniel to be her children and will continue to grow and strengthen the bond they have developed over the past few years. Now that the boys are graduating High School and advancing to the collegiate level of education, the O’Connor family plans on hosting two new international students.

“They did such a wonderful job” – Laura O’Connor